Although Anchor Farms is the project of the Clinton Foundation’s Clinton Development Initiative (CDI), it is directly funded by the Gates Foundation’s subsidiary AGRA under the Soil Health Program for the stated purpose of “improving the productivity of maize and soya beans through integrated soil fertility management and better access to markets.” The project establishes large commercial farms, called “Anchor Farms”, in rural areas. At the farms, the Clinton Foundation staff trains local farmers in commercial farming practices and mediate loans between commercial banks and the farmers for the needed equipment and inputs. END_OF_DOCUMENT_TOKEN_TO_BE_REPLACED 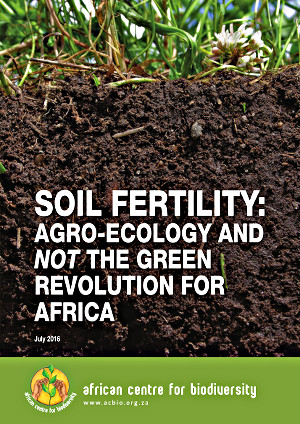 In mid July the African Center for Biodiversity(ABC) published Soil Fertility: Agro-Ecology and Not the Green Revolution for Africa, a comprehensive report on the consequences of the Green Revolution push in Africa, based on it’s fieldwork done in Malawi, Mozambique, Tanzania, Zambia, and Zimbabwe over the last three years.The report asserts that the promotion of increased synthetic fertilizer use in Africa for enhancing soil fertility is a short term fix, and is actually harmful in the long term.

Interventions pushing for high tech solutions such as genetically modified seeds, increased pesticide use and increased use of synthetic fertilizers have been spearheaded by fertilizer g
iant Yara, and the Alliance for a Green Revolution in Africa(AGRA), an initiative of the Bill and Melinda Gates Foundation. The ABC believes that, “the obsession with increasing adoption and uptake of synthetic fertilizers on the continent seems to be more about opening up fertilizer markets for multinational corporations, and stimulating commercial output markets than about identifying and responding to the specific needs of farmers in their socio-ecological context.”

END_OF_DOCUMENT_TOKEN_TO_BE_REPLACED 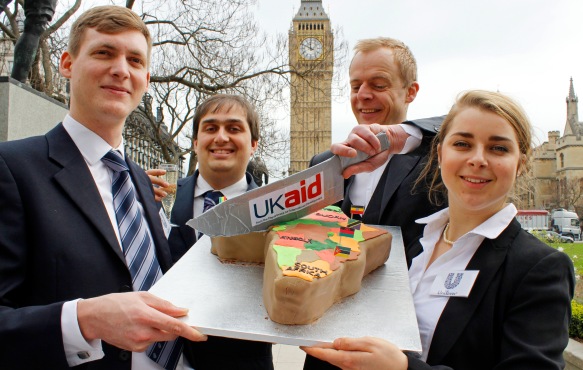 March 2014, World Development Movement(WDM) campaigners dressed as business people from Monsanto, Diageo, SABMiller and Unilever delivered a cake to the Department For International Development to “thank” the UK government for its support in allowing them to carve up Africa.

In early June the EU Parliament voted to accept a report put out by it’s development committee, in which The New Alliance for Food Security and Nutrition, an initiative of the Obama administration and the G-8, including the Gates Foundation, was heavily criticized for being ineffective as a means for improving world development.

In their article, EU parliament slams aid scheme that uses big agribusiness to ‘feed Africa’, Global Justice Now applauded the decision, as does AGRA Watch, agreeing that the New Alliance is an initiative meant to benefit big agribusiness instead of helping small-scale farmers, and vulnerable communities. It’s past time that world governments are held responsible for the funding of such initiatives that serve their own business interests over those of farmers and local communities.

END_OF_DOCUMENT_TOKEN_TO_BE_REPLACED

The Bill and Melinda Gates Foundation(BMGF) is a major donor to a World Bank affiliate known as Enabling the Business of Agriculture (EBA), a group that rates 40 developing countries on their policies that affect agriculture and agribusiness markets. The Oakland Institute, a partner of AGRA Watch, critiqued the connection in their April article, With a Little Help From Bill Gates, The World Bank Creates it’s Own Aid Conditionality. According to the EBA, it’s mission is “…identifying and monitoring regulations that negatively affect agriculture and agribusiness markets.” It frames these ratings as a way to encourage higher levels of food production, believing that this will combat world hunger, claiming that it’s encouraging countries to become more efficient, while “increasing market competitiveness and growth”. The Oakland Institute, as well as the UN disagree with this idea, understanding that hunger is not caused by insufficient food production.

END_OF_DOCUMENT_TOKEN_TO_BE_REPLACED

Like Loading...
Mark Lynas, claiming to be an early GM opponent, is now the biotech industry’s darling as he recants the errors of his ways.
In a speech given at the Oxford Farming Conference, Lynas apologized for having “spent several years ripping up GM crops… [and for helping] to start the anti-GM movement back in the 1990s…”
The Gates Foundation has picked up the industry spin and in a blog posted by Sam Dryden, the Gates Foundation’s director of agricultural development, Dryden discusses how “refreshing” it was to hear Lynas apologize for the “myths” he spread about GMOs during his time as a self-proclaimed anti-GMO activist.
AGRA Watch urges readers to visit Johnathan Matthews’ articles for GMWatch, The Repentant Environmentalist: Part one and Part two, in which Matthews  debunks Lynas’ claims and discusses whether Lynas’ speech isn’t “best understood as a PR narrative.”
Additionally, the Bioscience Resource Project has compiled a list of recent articles from experts putting the Lynas scientific misrepresentation into perpective.

The Bill & Melinda Gates Foundation has granted the International Rice Research Institute in the Philippines $1.3 million to help develop Golden Rice, a genetically modified strain of rice containing beta-carotene which the body may be able to convert to vitamin A.

In recent weeks, two news stories broke hyping up the expectations of Golden Rice.
In a response to the exaggerated news stories, the International Rice Research Institute issued a clarifying statement.
Michael Hansen, senior scientist at Consumers Union, has also discussed the hype regarding Golden Rice’s claim to combat vitamin A deficiency. According to Hansen, there have been three versions of the genetically modified rice varieties to date. The first version (GR1) had low levels of beta-carotene– a precursor to vitamin A–so low in fact, that a report by Greenpeace exposed that an individual would have to consume TEN pounds of the rice in order to get the desired levels of beta-carotene. Although the second version (GR2) had higher levels of beta-carotene, the real issue, Hansen states, was that because the genes were easier to insert in japonica varieties of rice, people in South Asia (who were accustomed to indica rice) would not eat the new variety. “It wasn’t until 2010 that they had been able to cross GR2 with local indica varieties and get plants out into the field to test. We still don’t know the levels of beta-carotene in the GR indica varieties. In addition, they still haven’t done the proper safety testing…” says Hansen.

Furthermore, according to Vandana Shiva, in one village she is familiar with, over 350 varieties of plants grow (dismissed as “weeds”) which are dietary sources of vitamin A. It is also likely that without other nutrients in a balanced diet, the child’s body may not be able to manufacture vitamin A from the precursors.

Regrettably, if an adequately nutritious and safe to consume variety of Golden Rice is ever developed, it would be foolish to assume that this technology would be made available to those who need in most, without prioritizing corporate interest. In a piece posted on GM-Free Cymru, Dr. Brian John writes, “The idea that Golden Rice is being ‘given to the world’ as a grand humanitarian gesture, with the high-profile support of the Rockefeller and Gates Foundations, is a scam — as realised by many observers even in the early days of the project. Syngenta owns the patents and the commercial rights in Golden Rice. It is not ‘giving away’ the technology but sub-licensing it with very specific conditions…So Syngenta keeps ownership, spreads the financial risk, accepts no liability, undermines the regulatory system, puts moral pressure on those who stand in the way of its ambitions, and still stands to make a killing if anybody (other than a small farmer) grows any Golden Rice hybrid in the future.” 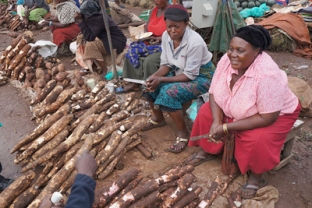 The Bill & Melinda Gates Foundation and the Department for International Development of the United Kingdom have given Cornell University $25.2 million to conduct a breeding project expected to improve yields on the cassava root. Researchers of this
project, which is estimated to take 5 years, plan to use a technique called genomic-selection which they hope will “shorten breeding cycles, provide more accurate evaluation at the seedling stage and give plant breeders the ability to evaluate a much larger number of clones without the need to plant them in the target environment.”
Genomic selection is not a GE process. Rather than engineering genes by combining them to form something new, this work uses genetics to read genomes of various cassava varieties, and to select those with the best characteristics. This research will be coordinated with many organizations both in the US, and in Africa, where cassava is a stable crop. It is estimated that 500 million people in Africa consume cassava daily.
Read more about this Gates-funded project here:
http://www.news.cornell.edu/stories/Nov12/Cassava.html
If you are interested in learning more about genomic selection you can read about it here:
http://aob.oxfordjournals.org/content/110/6/1303.full.pdf+html

The Gates Foundation awarded a $10 million grant last week to the John Innes Centre in Norwich to develop GE crops for use in Sub-Saharan Africa. The grant is to be used for the development of nitrogen-fixing corn, wheat, and rice, so that these crops would no longer need fertilizers. This decision has received much criticism from supporters of agroecological farming methods, and  Mariam Mayet of AW partner the African Centre for Biosafety said:

“GM nitrogen fixing crops are not the answer to improving the fertility of Africa’s soils. African farmers are the last people to be asked about such projects. This often results in the wrong technologies being developed, which many farmers simply cannot afford. We need methods that we can control aimed at building up resilient soils that are both fertile and able to cope with extreme weather. We also want our knowledge and skills to be respected and not to have inappropriate solutions imposed on us by distant institutions, charitable bodies or governments.”
Read the full story here:
https://www.commondreams.org/headline/2012/07/15
And the press release by the John Innes Centre in Norwich here:
http://news.jic.ac.uk/2012/07/cereals-self-fertilise/