AW partner Joshua Machinga of Common Ground for Africa (CGA) documents his group’s relief efforts in Turkana in this letter, focusing on the food shortage crisis and the importance of Grow Biointensive Agriculture. As flooding and inflated food prices leave many hungry in Turkana, CGA has focused on relief efforts especially training locals about the use of water filters, and training farmers in Grow Biointensive techniques. 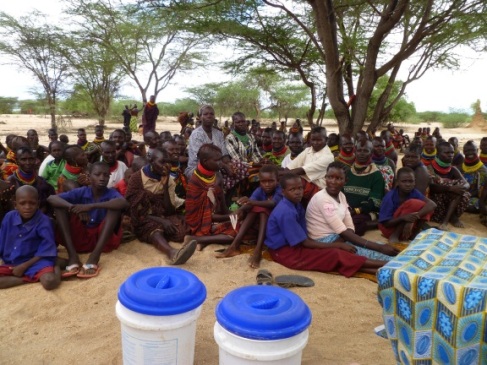 Once again receive greetings from Kenya, East Africa. I would like to take this opportunity to express my sincere appreciation to all that supported our efforts in Turkana and the team (Dodds, James, Susi, Sheila, Domil, Tristan, Douglas, Kuria, Kelly and Edan) for traveling over the rough terrain of Turkana County to reach out to the needy and hungry.

Extended periods of drought have plagued Turkana for years, affecting the food supply and economy. According to the World Food Programme, recent rain seasons have helped alleviate food strains in the region, but with an impending La Nina weather pattern approaching, any improvements that have been made may be reversed.

Concomitant with food insecurity are high levels of malnutrition. Children, mothers and elderly are particularly susceptible to hunger-related illnesses and even death in Turkana.

Staggering inflation rates and a lack of economic development have further stifled the county’s progress and have kept its people in poverty.

The locals waiting to recieve food and filters.             Crossing the river bed after waiting for hours to cross.

It has been raining heavily in Kenya and rivers have burst out everywhere with flooding. This has left about 600 families homeless and over 120 people dead. Properties worth millions are destroyed and the many homeless are without food or shelter. Turkana County has been hit very hard. It had not rained for many months but by the time we arrived it had rained heavily rendering the roads impassable. The easiest means of transport to Turkana was by air.

All of the water sources have been polluted by the excessive runoff and the price of food has now increased to more than 20 percent of what it had been over the past five years. These numbers could rise as food gets more scarce, putting struggling families at even greater risk.

The crisis has become so severe that in some parts of Turkana, villagers have resorted to digging up ant hills in an attempt to gather grain that the ants have stored. The villagers say that unless they receive help quickly, they will be forced to abandon their villages in a month’s time. In some villages, families have already been forced to migrate to other counties and into Uganda in search of food and jobs. As a result, about 3,000 children have already dropped out of school to follow their parents.

In response to the crisis, Common Ground for Africa (CGA) launched an emergency appeal, with the hope to reach hundreds of vulnerable people by providing the affected region with aid including food, water filters, sanitation and hygiene promotion campaigns.

We are so impressed by our farmers in Trans- Nzoia and Bungoma Counties who heard our call for assistance, and donated food for their suffering brethren in Turkana. While these farmers are poor and hungry, they took the time to plan, collect and store grain for us to take to Turkana.

Youth, 9-15 year old children who do not own farms, gleaned on other people’s farms to contribute to the relief efforts for Turkana and provide us with 3 bags of maize. We are grateful for their efforts to help us  feed the hungry. Their character and giving hearts are inspirational to us at CGA and we are honored to be working with them.  They are here because someone reached out for them and is helping to sponsor their education.  The cycle of giving does not end and there are many students with great hearts and if given the opportunity can contribute a lot.

Our relief efforts:  Kono village is an unreached zone for most relief agencies working in Turkana County. It was the first time in many years that they received food aid. It took us two attempts to reach the village. The first attempt we failed to reach the village because of the overflowing river beds a few kilometers away from Lodwar town. We were forced to spend a night on the road without food and water, and the following day we had to wait for hours for the water level to go down before crossing.

We finally managed to reach the village in 4 wheel drive cars. Many families traveled many miles to reach the camp where we had stored food. When they saw the cars, they sang and danced.

Programs like these are not sustainable since it depends on having the funds to purchase food or collect food donated from poor farmers in other counties.  The communities in both Lodwar and Kono requested for training on GROW BIOINTENSIVE farming so that they can become self-sufficient. CGA was given two sites to develop demonstration farms/gardens. One site is Lodwar town near river Turkwel and the other in Kono, 6 hours away from Lodwar town.

In reporting on the work that we are doing, we kindly ask for your support as we hope to develop these demonstration sites for villagers to learn how to use GROW BIOINTENSIVE farming.

With the generosity, that local people have for one another and the compassion developed early in our sponsored youth, we would like to thank our farmers in Trans- Nzoia and Bungoma Counties, the sponsored high schools students at Pathfinder Academy, and our supporters for helping us reach the needy and hungry.

We are now asking for your help. Funds that you may donate will be used to set up demonstration farms that will teach sustainable farming techniques with special emphasis on drought tolerant crops and dry climate growing techniques. CGA will station a trainer with the help of Teach to Learn scholars to promote self help food raising (GROW BIOINTENSIVE) method  in Turkana. This will assist to eliminate hunger in the future, and will mean more than any aid provided.